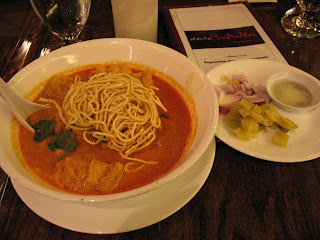 Well, I finally made it to the Thai food Mecca of NYC, Sripraphai, sometimes called the best Thai food this side of Thailand! Lucky we got there at 6 PM, because even though it's huge (we couldn't even see all the tables in the 2 rooms), it filled up fairly soon after we got there. And there's a reason for this: the food rocks. my world and your world. They have both the standard (read ho-hum) Thai dishes you see in every Thai restaurant in the city like Pad Thai and egg rolls (many of these are very good here, though), and then there's the way out there dishes that you don't see on many Thai menus like deep-fried watercress salad (definitely crunchy, but tastes more like "fried" than watercress), soft shell crab curry, and beef offal soup that are the real standouts. We of course orderd the Khao Soi (spelled Kao Soy here), but the advantage of having 10 people at dinner with you is that we got to try many dishes like the ones listed above plus green papaya salad (zesty and yummy), green curry duck (delicious, at least the curry part), pad see ew (a.k.a. drunken noodles with basil, great here and everywhere I've had it), and red curry noodles (sort of like Khao Soi minus the toppings and the sourness). Check this Chowhound post for some other standout dishes.

OK, on to the Khao Soi! It was easy to spot on the menu, easy to order veggie, and easy to eat here. It came with the toppings separate which I like as you can adjust the sourness yourself, but it was a bit strange that they gave you a bowl of lime juice rather than a lime wedge to squeeze yourself onto the dish. Seems like it'd be a bit less fresh that way. There was the pickled mustard and fresh shallots, but unfortunately no fried shallots, probably my favorite topping. The broth was delicious, rich, silky, and complex, and the fried noodles on top stayed crispy to complement the soft noodles in the broth. It again had that deeper star anise flavor like Kittichai's Khao soi did as well, so I'm not sure if this is an East Coast US variation, or a regional Thai variation, since I don't remember having it like that in Chiang Mai. Who knows! Delicious nonetheless, just a little non-traditional in my opinion.

Wow, this has been quite a week with three Khao Soi's in one week! Monday at Em Thai sampling a friend's Khao Soi, Tuesday at Kittichai, and Saturday here at Sripraphai. Maybe I should try to make one more before the week is up.

So I'm giving this one 4 stars solely for the slight dearth of toppings and no fresh lime, but remember this is just for the Khao Soi and I'd give the restaurant itself 6 stars for being so delectable even with the crowds.

thanks for getting me hooked! hopefully i'll soon have field reports for you from boston & chicago. and then i'll get the real deal in chiang mai before too long, woo hoo!

I was so excited about your blog when I found it on the real thai website.

The best one that I found was on the street during the Loy Krathong Festival in Chiang Mai. I didn’t even know what it was, I just sat down and pointed to what people were having and just helped myself to the selection of garnishes. I went back the next night and haven’t found anything as good since. I keep dreaming about it and don’t even know if I would ever find these people again since it was a street festival and not an actual restaurant.

Thank you for the Chili Thai and Pam Real Thai recommendations. I will have to check them out.

I did see the Thai article in the Times a few weekends ago. I need to plan another trip soon, maybe this summer….