Terminal Thai in the East Village 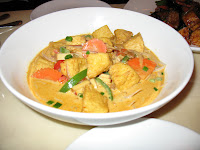 It's been a while since a posting from your friendly neighborhood Khao Soi Quester, mostly because I'm running out of places to try the dish at, unless I get reports from you, my fearless readers, of Khao Soi-serving joints in the far reaches of Gotham. Here and there I bike by a Thai restaurant and perhaps one out of 20 has some form of Khao Soi on their menu, so there's still a couple more to try. What I initially thought would only be a journey to 10 or so places that served it has now blossomed to 18. It seems to be a moving target, Heisenberg's Uncertainty Principle and all that.

I can't remember exactly how I found Thai Terminal (formerly Roomservice Thai, with just a name change, not a change of owner), just strolling by or trolling the 'net, but I'd been there once before with the hopes of tasting their Khao, but they were "out" on a Sunday evening for some reason. I know this is a rare dish, but none of the ingredients really are, so I didn't understand exactly how they could be out, but perhaps it was the need for egg noodles. It brought me back to my visits to Thailand, where I was haunted by the phrase "mot lau" which roughly translates as "it's finished" and I heard everywhere- go to the noodle shop and they were "mot lau" of noodles, go to the sticky rice place and they were "mot lau", and sometimes I thought if I went to the water supply place they'd be "mot lau" as well! Maybe that's why Thai Terminal switched to using flat rice noodles, like those in Pad Thai, instead of egg noodles for their Khao Soi. They gave me a whole explanation of the fact that their customers didn't like really authentic spicy Khao Soi with egg noodles, so the Pad Thai noodles made it a little more accessible to the general population. I suppose that could be true, but I've never seen someone scared off a dish by egg noodles.

They described Khao soi as "Shrimp Curry Noodle- choice of rice noodle or egg noodle in thai's northern style curry broth with bean sprout, and scallion" on the menu, but of course it had rice noodles, and they were happy to make it with tofu instead of shrimp, though I doubt it's truly vegetarian given that it probably has fish sauce. The dish that arrived on our table looked and tasted pretty much like Khao Soi, though it lacked any of the toppings... any! I don't think I even saw one of the purported bean sprouts. So although the broth was thick and rich, I missed the occasional tangy bite of the pickled mustard greens or the crunch of the fried shallots or fried noodles to vary the texture. The other veggies (peppers, onions, tofu) in there were tasty and the rice noodles didn't make a big difference.

We also ordered the Chive Pancakes and Wholesome Tofu Eggplant, both of which were tasty, but low on spice. A little nam pla prik chili fish sauce took care of that though. The setting of Thai Terminal is pretty high tech, matching Pukk down the street a bit, looking more like the set of the space station in 2001: A Space Odyssey than your standard New York Thai restaurant. None of it is mind blowing, but definitely tasty, and the only close place in the East Village to sample Khao Soi (check the handy new map in the right bar to find your closest place), so given the nice ambiance, the friendly service, and the generally tasty food, Thai Terminal is worth a try if you don't go on a Sunday when they are "mot lau" of Khao Soi!