No, Virginia, there is no Santa Claus and Portland is not a New York neighborhood, but they do have stellar Khao Soi there 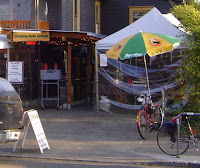 This week we're going national with a guest post from Tom out in the Pacific Northwest on a place in Portland, Pok Pok, that I've heard great things about, while I try to finish off that all important dissertation and try not to get distracted by making chocolate:

I'm a friend of Nat's from when he first started a supper club to "go eat some food on Tuesdays together" in New York City back in 2000. Along with styles such as Indian and Ethiopian, our group enjoyed Southeast Asian restaurants like Tara Thai (137 1st Ave., Manhattan), Cambodian Cuisine (87 S. Elliot Place, Brooklyn), and Tibetan Yak (7220 Roosevelt Ave., Jackson Heights). Since I moved to Bellingham, WA from Manhattan in 2003, Nat asked me to act as nonresident contributer to this blog. We both had read positive reviews of the Thai restaurant called Pok Pok, which is in southeast Portland, Oregon. So I was excited to sample the fare during a road trip (for those interested read more about my carbon offsets for the drive) to southern Oregon. I also wanted to partake in my first Khao Soi!

The Whiskey Soda Lounge portion of Pok Pok is downstairs, and there's take-out and table seating upstairs. The lounge has tight quarters, which turned out to make the meal feel more communal. Because of my fairly central location sitting in the lounge at the bar, the staff buzzed around me while I smelled and eyed the spicy tidbits near by. The wait staff and bar tender were friendly and knowledgeable about the ingredients. One waiter suggested I eat my Khao Soi using chop sticks and a large spoon, much like the variety of Japanese udon wheat-noodle soups I sometimes eat. My mild-curry brew was multifaceted, and the utensils were helpful to sift through the many layers. From the menu:
Khao Soi Kai, Northern Thai mild curry noodle soup made with our secret curry paste recipe, natural chicken on the bone and house-pressed fresh coconut milk. Served with pickled mustard greens, shallots, crispy yellow noodles and roasted chili paste. Chaing Mai specialty with Burmese origins. Vegetarian [option]

I'm sure you all know that "Kai" is a common English spelling of the Thai word for chicken. My vegetarian version contained oyster mushrooms, which were meaty and satisfying. There was fresh cilantro on the side, along with the pickled mustard greens, shallots, and roasted chili paste. I consumed all the garnishes concurrently with broth. The combination of mustard greens, tofu, oyster mushrooms, rice noodles, and crispy yellow noodles was a daring textural counterpoint, while the roasted chili paste blazed with flavor.

I also drank a glass of Thai iced tea, and a bottle of Chang beer; when I overdid a dab of chili paste, the milky tea helped extinguish the spice on my tongue. Halfway through the mixture of tastes made me feel euphoric. By the end I had feasted on the entire, sizeable bowl, but I was craving more. It's clear to me why Khao Soi is a common Thai street dish; it's an audacious and epicurean treat!

For other things Thai food related, there is a fun little video on the New York Times where I talk about my first trip to Chiang Mai and extol the virtues of my favorite fruit, the Mangosteen, which you might enjoy.
at 7:56 PM

I really like your blog. I started a similar quest in NYC a couple months ago, after a trip to Chiang Mai. I haven't had nearly as much success as you have, though. Anyways I have a khao soi question for you. The Khao Soi that I had at Pam Real Thai in Hell's Kitchen, and the one other that I had at Pongsri on Baxter st. in Chinatown both had these very skinny, tasteless, curly egg noodles that were totally different than what I had in Chiang Mai. Are all of the Khao Sois that you've had in NYC like this? I like the bigger, chewier egg noodles better. I had something similar to khao soi at Jaya Malaysian restaurant, also on Baxter st. in Chinatown, and they had the good noodles, but were missing a lot of the toppings. The broth was yummy though. Okay thanks! Love your blog.

Which dish did you have as Khao Soi at Pongsri? I don't see anything listed on their menu that sounds remotely like Khao Soi. They do have several curried noodle dishes, but without the sourness and condiments, it's not the same. I assume you meant it was on Bayard st., right?

Ditto with Jaya, which I love, but I don't remember anything on their menu resembling Khao Soi, unless you're talking about the Laksa Noodles perhaps. This has a lot of spices and can be sour, but is much heavier on the cinnamon, cloves, and star anise than a Khao Soi would be and has none of the toppings.

Too bad you didn't like Pam Real much, I thought they were pretty good, though I know what you're saying about the noodles. Try Chili Thai, Klong, or Rhong-Tiam in Manhattan if you want something heartier. I don't believe I've ever seen the dish with really thick noodles in NYC, though.

Good luck with your search, let me know what you find, and thanks for stopping in!

hi nat
just wanted to say hi. we had khao soi from suriya the other night. it was dee licious, which i know is not a really knowledgeable description of the dish, but it's the truth...

miss you and hope all is well

Pok Pok has the best Khao Soi EVER!!!!

Well, I have never been to Thailand, but...

I've had the kao soy at Pok Pok, and I wasn't overwhelmed. It is nice that they are using their own chili paste, and even their own coconut milk, but I missed the extra creaminess that I get when I make it at home. I think Thaiku in Seattle makes a better version.

Btw, I recently won a ramen cook-off making a version of kao soy with ramen noodles. I posted the recipe on my blog here: http://forkthis.blogspot.com/2008/11/brooklyn-kitchen.html

I've never been to chiang mai, so I have no idea how authentic any particular restaurant is but I am definitely addicted and happy to find your blog!

Initially I was not too impressed with Pok Pok's khao soi. After eating it for a few minutes though my taste buds seemed to shift and I enjoyed the complex dish. I ordred the vegetarian version which went quite well with their vinegar chicken wings! Their thai ice tea was great and so was the honey drinking vinegars. YELP has given away Pok Pok as being Portlands premier Thai restaurant with over 500 reviews.