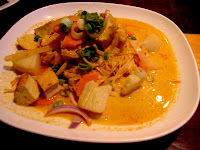 Finally back to the matter at hand, namely coconut milky, curried, fried noodles and shalloty goodness! This is one of the few Thai restaurants serving Khai Soi that I've discovered merely by happening by and taking a glance at the menu, rather than hearing about it from a friend or finding it online. Did you know that menupages.com now lets you search for a particular dish name on menus of thousands of restaurants? This is difficult with the myriad permutations of Khao Soi's name, however, and they only cover Manhattan and part of Brooklyn. I did find two new places this way that serve it, however: Blue Chili and Rhong-Piam, now added to the map at the right. So otherwise I need all you new and old Khao soi fanatics out there helping me find these new places not listed on menupages, like Udom. I finally made the journey out to Brooklyn Heights to give Udom a try last week with my friend Becca who lives in the hood and who initially got hooked on the dish with my version of it.

Udom is a relatively standard version of the more modern, hip Thai restaurants sprouting up all over town with bright, warm colors and spiffy fixtures. I'm undecided yet as to whether this decor incarnation has any effect, bad or good, on the food. The other dish we ordered, a spicy eggplant stir-fry with basil was pretty tasty and nicely spiced, and the coconut water with chunks of coconut meat, though not taking any prep on the restaurant's part, was a nice offset to the heat of this dish and the Khao Soi.

When the dish in question arrived on our table and on our tongues, it had us divided, most likely because it was the sour, limey version which I love, vs. the musky, anisey one which I think Becca is a fan of. Granted it didn't have all the toppings and lacked a bit of depth in the curry flavor, but I know a proper amount of lime goes a long way for me as it's my natural form of MSG, making everything taste better, even the nasty ripe papaya (though I adore Som Tam, the unripe green papaya salad, more on that at the end of the review). We got the mung bean sprouts and pickled mustard greens on this one not all the crunchy fried nutttiness of the noodles and shallots. There also wasn't much of the tangy broth to speak of since it was in a shallow plate instead of a bowl, which was too bad as this makes the flavor. But they of course did not call it Khao Soi (but rather egg noodles with yellow curry or something to that effect), so I suppose I can't expect the complete dish.

Udom is definitely worth hitting if your in the hood since the nearest Khao Soi is at least a mile away in either direction at Em Thai in Carroll Gardens or Am Thai in Kensington.


Ok, so you made it this far, you must want to know more about Som Tam, or green papaya salad. Although I consider myself a fruitaholic and have tried over 200 different species of fruit, domesticated and wild, in my travels around the globe (yes, I keep a list of all these fruits, call me crazy!), there are a rare few fruits that I don't like, papaya being one of them, unfortunately. Ripe papaya just smells a little too close to ripe feet for me, if you know what I mean. It is served for breakfast so often in Bali, that when I was living there, I got used to making it palatable by smothering it in the juice from the tasty little limes they have there, and realized lime juice could make everything taste better, even the nasty papaya! I love, however, the Som Tam salad common in Thai, Vietnamese, Malaysian, and Cambodian food, made from shredded unripe papaya, carrots, tomatoes, peanuts, cilantro, chillis, cumin, sesame oil, fish sauce, vinegar, and palm sugar as its main ingredients. I often hunt down the green papayas in New York's Chinatown to make this dish myself, especially when I can make it vegetarian, substituting the fish sauce mentioned in this post and leaving out the dried shrimp.

So it was to my great dismay when I did my ethnobotanical fieldwork studying medicinal plants in the Peruvian Amazon with the Asháninka indigenous group where the papaya is actually native to, that I saw perhaps hundreds of papaya plants loaded with ripening fruit and not much else to eat. I tried to think of how I could divert these fruits before they wound up on the table in front of me, but I didn't want to be rude and say I didn't like them, when our hosts were being so gracious in taking care of us in the this little village of 25 people, with few other food resources besides wild game like turtles, wild turkeys, and majás, the second largest rodent in the world behind the capybara. I then remembered how much I loved green papaya salad which I hadn't seem made in Peru, so I thought I'd show them how to make it, get them hooked on it, and then all the papayas would be eaten in their green state before they reached their full ripe nastiness! And it was perfect since many of the ingredients like tomatoes, chillis, and culantro (or thorny cilantro) are native to or growing in the area.

Well, my plan worked, perhaps a little too well. The Asháninka loved the green papaya salad, but instead of making it themselves I was inundated with green papayas with someone bringing me a few from all around the village every day, asking me to make it for them. I almost didn't get my field work done due to introducing this popular Asian dish to them, but in the end I was happy I didn't have to eat that cursed ripe papaya. Any anthropologist who goes to study in this village after me is going to be quite confused as to why a South American group is making a Southeast Asian dish! That will give someone plenty of material to theorize on in their Ph.D. thesis.
at 10:16 AM

ooo... i am an eggplant super fan! sigh. i want the spicy eggplant sooooo badly right now. with rice.

this is really one of the simplest dishes to make anywhere in the world so long as you can get hold of eggplant and sauce package.

Here I bought a sauce pack so as to skip all the seasonings! and i will try this friday after work.
http://yummiexpress.freetzi.com

stumbled across your blog while searching for 'prospect heights thai'. i suddenly lost my appetite for thai so i didn't read the review but i did enjoy the ripe/unripe papaya story :)

like BankBank, I also stumbled across this post after doing a search for "prospect heights (udom) thai". We takeout from Udom fairly regularly, but I'd never even heard of Khao Soi before..going to try it tonight from Udom, and check out your other posts for other spots in the city! Nice work on the blog..

Glad you found the post useful. Let me know how the Khao soi is there these days since I haven't been there in about 3 years.

I’m so excited because my broken marriage has been restored & my husband is back after he left me and our 2 kids for another woman. After 8 years of marriage, me and my husband has been into one quarrel or the other until he finally left me and moved to California to be with another woman. i felt my life was over and my kids thought they would never see their father again. i tried to be strong just for the kids but i could not control the pains that torments my heart, my heart was filled with sorrows and pains because i was really in love with my husband. Every day and night i think of him and always wish he would come back to me, I was really upset and i needed help, so i searched for help online and I came across a website that suggested that DR.Osasu can help get ex back fast. So, I felt I should give him a try. I contacted him and he told me what to do and i did it then he did a (Love spell) for me. 28 hours later, my husband really called me and told me that he miss me and the kids so much, So Amazing!! So that was how he came back that same day,with lots of love and joy,and he apologized for his mistake,and for the pain he caused me and the kids. Then from that day,our Marriage was now stronger than how it were before,All thanks to DR.Osasu . he is so powerful and i decided to share my story on the internet that DR.Osasu real and powerful spell caster who i will always pray to live long to help his children in the time of trouble, if you are here and you need your Ex back or your husband moved to another woman, do not cry anymore, contact this powerful spell caster now. Here’s his contact: Email him at:Account:
drosasu25@gmail.com , you can also call him or add him on Whats-app: +2347064365391,THANKS TO DR. Osasu