AM Thai Chili Basil in Kensington 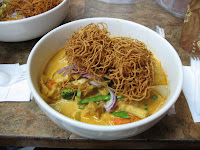 This quest is really starting to take me to new areas of my hometown that I've never explored, an unexpected benefit of this obsession. This place in Kensington, Brooklyn on the southeast side of Prospect Park is the newest area for me as I'd been to Sripraphai's area in Queens before exploring the multitudes of diverse ethnic restaurants there and the Bronx area of Siam Square being my old high school stomping grounds. So when my friends Ellen and Charles just moved to a place down the block from AM Thai, I planned to meet them and my friend Becca for a little house-warming, or least neighborhood-warming dinner. The restaurant is in a very residential area, so we biked right by it the first time without noticing it as it looked nothing like I expected. The place is mostly just for take out with two tiny tables that they had to clear off of stacked plates to sit at. There is zero ambiance here with fluorescent lights and seats as an after thought, but that made it feel all the more like an authentic Bangkok night market stall because the food was excellent all around. So don't come here for the mood, or just get the food to go and set the right mood at home since this food is not be missed.

I tasted a good range of the dishes even though at first everyone was tempted to just order their own plate of Khao Soi, having had it with me before and knowing the dish's potential greatness, but I dissuaded them and promised to liberally share what I ordered if they would do the same. Charles' Tom Kha Gai (coconut milk soup) might have been the best rendition of this dish I've had in New York, with a sharp spiciness of the chili oil, smoothness from the coconut milk, and the pungency of the lemongrass and galanga (a root related to ginger that has the anti-depressant monoamine oxidase inhibitor in it, the most common antidepressant before SSRI's like Prozac were introduced. This is why I think people always like this dish so much– it makes you happy!). His mock duck with basil was tasty as well and Ellen's spicy fried fish had a delicious kickin' sauce covering it. This was all in addition to the Khao Soi which turned out to be up there with the best I've had in New York.

The bowls of Khao Soi (I didn't convince everyone to order something different) arrived with everything on top already, so we missed out on the fun of tuning it up ourselves, but this wasn't so bad as almost all the toppings were there save fried shallots, and it tasted so exquisite, with a nice mound of fried noodles on top, mung bean sprouts, pickled mustard greens, red onions, a very smooth, spicy, and sour broth, and yummy chunks of fried tofu. Actually, one strange twist was that this version had no soft noodles in the broth, just the large golden brown dollop on top, but these weren't missed because the broth was so substantial and you could just submerge the fried noodles in the liquid long enough to get them to your particular desired level of softness. I've seen it done once before like this at Em Thai, also in Brooklyn, so maybe it's just a local Brooklyn variant of Khao Soi. I was tempted to slurp down every last bit of the curry but remembered my promise to share and had gotten filled up on all the other tasty food.

The chef kept coming over and asking us if we'd been to Thailand, I guess because we'd ordered such obscure dishes rather than the standard Pad Thai and seemed to be taking the heat of the food without too much of a profusion of perspiration on our brows. She said she was from Bangkok but had picked up the idea of making the dish from "that Thai place in Queens" a.k.a. Sripraphai and recreated it on her own. I never knew Thai chefs did industrial espionage like this, but in this case I'm really glad she did!

So get yourself to Kensington right quick and try some of this Khao Soi that stands up to trendy places that charge twice the price for this dish. A good day for Khao Soi all around, though not in other aspects of my buggin' life. Maybe I just need to eat more of that galanga to get through the darkness of winter!

thank you, from the bottom of my heart, for this blog. after having khao soi in chiang mai a couple of months ago, i have been obsessed. since then, i have stumbled upon it on the online menu for kin khao, and was planning on going there. thanks for giving me better suggestions! holy crap, i wish i could leave work right now and have some delicious khao soi!

like judith, i just want to thank you for your blog! i just spent 2 weeks in thailand, ending the trip with 3 nights in chiang mai, and it was definitely the culmination of thailand for me - elephants, the night bizarre, and khao soi! i am embarking on a similar quest now here in nyc, and am glad to have this guide to start me off. chai yo!

Thanks for the recommendation - we just moved to Ditmas and tried AM Thai last night. Seriously, some of the best thai we've had in NYC. We ordered fried mussel pancakes, pad kee mo, basil fried rice, ginger curry, and the khao soi. All were delicious! Serious heat in the noodles too. We will definitely be regulars here.

i just moved nearby and walked past this by chance on saturday right when i was hungry. i had temporarily forgotten that this was the place in your blog, so i ordered a different dish because i didn't see khao soi or anything similar on the menu. did you ask them to make this or is it called something else on their menu and i missed it? what i did have (scallion dumplings and pad broccoli - mixed veggies in garlic sauce - was delicious) and it totally had a bangkok night market ambiance. will be getting delivery frequently.

Sherri, you are very right! I forgot to say what the dish is called on the menu, which I try to do in ever post since its name is so variable.

I can't even find where on the interweb where I learned they had this dish, but I think I just called them and asked them to verify they had it and then ordered by the name "khao soi" and they knew what to do. Hope you can get it next time you're there, let us know what you think.