A Tale of Two Khao Sois

For this episode of your friendly neighborhood Khao Soi Blog, I'm branching out a bit from trying Khao Soi in restaurants to describing two versions of my own making, so you know that I walk the walk and don't just talk the talk. I've been cooking my own version of Khao Soi for 10 or more years since I asked Suriya, the chef at Suriya Thai restaurant in San Francisco to give me his delicious recipe for this dish during some of the great cooking classes he conducted in his restaurant's courtyard, while the upstairs neighbors blasted Abba's "Dancing Queen" over his attempts to tell us where to get the best curry paste. Such an SF moment! 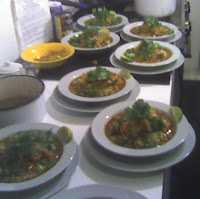 So for the first part of this tale of two Khao Sois, we go to christmas eve dinner, where my family's "traditional" meal was a seafood gumbo. Not sure exactly where this came from since none of us are Cajun, but most likely stemmed from how easy it was to cook. Apparently I got my parents hooked on Khao Soi when I made it for them for mother's day this year, so they asked me if I would make it for the 7 people coming to our house for christmas eve dinner, reviving an even older tradition of our family where we, like all good Jews celebrating christmas, would order in Chinese take out for christmas eve and christmas dinner. I was glad to have a chance to proselytize this dish to more people, and gathered up all the necessary ingredients with the help of my parents to cook up a Khao Soi feast for everyone: sprouts, cilantro, limes, egg noodles, red curry paste, yellow curry paste, garam masala, coconut milk, tofu, pickled mustard greens, shallots, chili sauce, and "fish sauce". I put "fish sauce" in quotes because I make a vegan version of it with equal parts molasses, rice vinegar, soy sauce, and a dash of nutritional yeast to give it that characteristic sour/sweet/salty/fermented taste. This works quite well and most people don't even notice the difference.

After brewing the curry soup, cooking the noodles, and frying up tofu, shallots and noodles, I was ready to stack the plates high with all the tasty toppings, leaving the lime, shallots, and chili sauce for people to add on their own to their liking, I was quite happy with the results that you see above, ready to go out to the thousands of hungry christmas faithful (OK, it was just 7). Even though it was a bit hot for usual holiday fare due to the curry pastes and many were sweating by the end of the meal, most people gobbled it down and some even asked for seconds, all a good sign. I won't rate my own Khao Soi, but it's definitely worth a try making on your own from this recipe for instance, as a nice warming winter meal, or a refreshing, gonna-make-you-sweat summer dish. 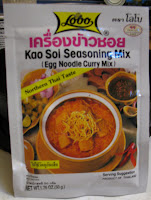 For the other half of the story, I found this pre-packaged Khao Soi spice mixture from Lobo foods (or is it Globo? It says one thing on the front and another on the back) in my local favorite Thai/Indonesian grocery store, Udom Corp., so I figured, what the hell, I'll give it a try. This was fairly easy to cook, taking only about 45 minutes from start to finish, including chopping all the toppings, compared to about 1.5 hrs for the homemade Khao Soi above. This packet contains a brown powdered mixture of spices, sugar, salt, MSG, curry powder (why don't those count as spices as well?) and citric acid. I'm surprised that salt and MSG were not the first ingredients, since this stuff tasted extremely salty when I tasted the broth, more like ramen packaged broth than the thick, rich, sour taste that the Khao Soi broth should have. With this mixture, you're instructed to chop meat (tofu in my case), cook the spice mixture with coconut milk, add meat, cook for a bit, add more coconut milk, cook till meat is tender, then add cooked egg noodles, soy sauce, lime juice, and chili sauce. When I followed these directions, I was still overwhelmed by the saltiness of it, so I added some sugar (palm sugar of course! The only way to go for SE Asian cooking, and for any sugar junkies out there, you'll love this stuff. Even tastes great melted and poured on popcorn), which improved it a bit.

Once I'd added the noodles and all the requisite toppings (I guess I can only get them all when I make it myself!) it turned out to be quite passable since the broth was a more minor portion of the dish, with the tangy sour taste of the pickled mustard greens, the nuttiness of the fried shallots and noodles, and the zing of the chili sauce and fresh shallots starting to dominate. So if you're really pressed for time, I'd say this packet version of Khao Soi might be worth trying, though it is probably harder to locate for most people than the ingredients in the completely homemade version, the hardest to find of which are probably the curry pastes and palm sugar. These can all be found in a Chinese or SE Asian grocery store in your local chinatown fairly easily.

I'd give this packaged version 3 stars only if you make the amendments of palm sugar and all the toppings, maybe only worth it if you're stuck somewhere where you can only mail order your Khao Soi.

I just stumbled onto your blog and I love that you are as obsessed with Khao Soi as I am! I used to live in Brooklyn and have only had the versions at Em, Klong (in the East Village), and Sripraphai, and my favorite one was at Pok Pok in Portland, OR.

I'm actually making some tonight for myself and my mom because she has been dreaming of it since we had it in Portland.

I usually use mock duck when I make it, but my mom hates that stuff, so I'm using extra firm tofu tonight. Do you add any other veggies, and, if so, which ones?

Also, I have found that a good pinot noir rose wine goes great with Thai food, especially this dish - try it sometime!

Yes, extra firm tofu would go great, maybe even fried a little beforehand to give it some crust. I often put bok choi as an extra veggie in there.

I didn't know about Klong before, thanks for telling me about it! I'll have to add it to my list of 2 more places to try. Is this their Khao Soi:
"Floating Market Curry Noodle - Rice noodle with hard- boiled egg, fried shallot, bean sprout, and scallion in light curry broth."? That's the closest thing to it I found on their menu.