Thai Tony's in Prospect Park and a successful defense 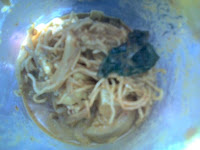 Well, I finally did it! Yep, now I'm a an honest to goodness PhD, though I should probably spell it Fud since that's what I mainly thought about and procrastinated with by cooking instead of writing all these 9 long years. To celebrate my successful defense I went out for amazing electronic robotic gamelan (courtesy of Taylor Kuffner), a free Deerhoof concert, and of course, Khao Soi! It was quite a night of food and musical celebration with Balinese gamelan, New Zealand savory pies from Dub Pies, Indonesian food from Java Indonesian Rijsttafel, and finally Thai food.
I've been really sad that two of my favorite nearby Indonesian restaurants, Borobudor Cafe and Soho Eastanah Indonesian, closed in the last year, leaving only 5 Indonesian restaurants I know of in NYC. Guste Bagus who ran Borobudor started a great Balinese bakery called Pinisi , that serves the excellent Ghost Chili Cupcake, made with the hottest chili pepper in the world, but there's no savory traditional Indonesian food like burbur injin (sticky coconut black rice pudding), gado gado (veggies with peanut sauce), or tempeh which the Indonesians invented. So I've been excited to try Java Indonesian for ages, and while walking there I glanced in at the Thai Tony's takeout place on 7th Ave down the block, and saw 'Kao Soi' on the menu board. After a tasty and sweet snack of achat (pickled veggies and fruit), es campur (color fruits and jelly shake), and coconut pudding and a conversation with the sweet owner there, I decided I had to stop back at Thai Tony's and get their Khao Soi to go, since I might never be in this neighborhood again before I leave NYC.

I can't tell you anything about the other food there since this was all I got, but the ambiance is nice, with the more modern feel of Pukk or Terminal Thai, and they were nice enough to give it to me directly in the glass jar I always seem to carry with me without looking at me too askance, avoiding any plastic packaging at all. This place is mainly for takeout though, with only a few bar stools up front. If you want to sit down, it might be better to go to their other branch in Kensington, though I'm not sure they serve Khao Soi as well. I have heard that the 7th Ave. Thai Tony's is undergoing renovation, but should reopen sometime in mid-December.

Not a huge amount of toppings to speak– fried noodles, raw shallots, some sprouts– but this may have been because of its to-go status. Perhaps eating there would have led to a more elaborate presentation. But the broth was nice and tangy, perhaps a bit salty, but nothing to shake a stick at for a quick bite to eat and run. I actually ate most of it enjoying the free Siren Music Festival in Coney Island RIP. I would definitely go back here if I was in the hood, definitely worth 3 stars, though relatively nearby, I think AM Thai Chili Basil in Kensington is much better.

For those of you interested in local food, tropical fruit, SE Asia and my ethnobotanical and culinary tours of Bali, I did a radio interview with KCRW's Good Food's Evan Kleinman last month about foraging for food in Central Park and foraging for fruit around the world, which you can listen to here, about 23 minutes into the show.

Congratulations on your defense! I assume you know about Austin Bush's wonderful blog. In the past few weeks, he's included 7 "gratuitous images' of khao soi. Start here and work backwards: http://www.austinbushphotography.com/category/foodblog/

Yes, I know and love Austin Bush's great Thai food blog, definitely an inspiration to me. He definitely knows how to make the food look as wonderful as it does in person, something I'm still learning.

I read that you are in search of incredible Khao soi...Try Talent's Khao Soi. I just ordered some for lunch and I was beyond amazed. It was so spicey and yummy and oh man, you gotta try it! This restaurant just opened up on 34 btw 2&3rd and makes some really great authentic spicey thai food.

Thanks for the tip on Talent. I hadn't heard about it. Unfortunately (at least for trying Khao Soi in NYC), I've moved to Hawaii 6 months ago so will have to try it on my next trip back to NY, who knows when. Khao soi is not so great or numerous here in Honolulu. :(

Talent looks really interesting, focused only on northern thai noodle soups! Sounds like a dream come true for me!