Klong in the East Village 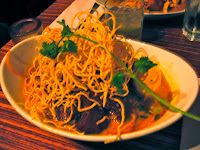 I usually discount all the restaurants on St. Marks st. between 2nd and 3rd avenues, just keeping my head down and trying to get by all the sunglasses and head shops without incident. Not to mention that it's often hard to see into the semi-subterranean restaurants set back from the street hidden behind the knick knack shops. So I have Roopa of the Raspberry Eggplant blog to thank for notifying of Klong in the comments to my Tale of Two Khao Soi's post. I had never seen, heard of, or noticed Klong before and neither had my friend Sienna who came with me and even lives only a block away.

The place looks like one of thos trendy modern half-nightclub, half-Thai restaurant places with the full metal furniture, blasting music, and the menu full of graphic designy goodness, so I was a bit wary at first but when I asked the waiter where the Khao soi was on the menu, he knew exactly what I was talking about and directed right to the floating market curry noodles described as "Rice noodle with hard-boiled egg, fried shallot, bean sprout, and scallion in light curry broth", $8-10 depending on choice of meat. I've never seen this as a name for Khao Soi before and it doesn't make much sense to me since khao soi is not served exclusively at the floating market in Chiang Mai. Nonetheless, I've seen so many names for this dish I was unfazed, so I ordered it with mock vegetarian duck.

They advertised their happy hour even though we were there at 8 pm, so we both ordered the basil mojito, which was pretty tasty with the nice Thai twist of Thai basil instead of the standard mint for only $5. This could almost be considered a more native SE Asian cocktail since all the ingredients originate from the area: the limes, the basil, and the sugar from sugar cane which is actually native to Papua New Guinea rather than the Caribbean as is often thought. I've become really interested in mixology, classic cocktails, and novel twists on cocktails like the ever-so-tasty bramble (which I make with Central Park-picked juneberries and call the Ramble) and a Pomelo Pomegranate Sidecar I recently came up. In my surf band The Aquamen, where we name all our songs after cocktails, we often explore the history of the drinks (like the gin and tonic, which has a somewhat ethnobotanical/medicinal origin as a British combo of medicinal gin, quinine for malaria, and lime for scurvy created in India) or have to come up with new mixes to go with the songs. This happened when I wrote a song called Siberian Sidekick which was half Russian folk song and half spaghetti western/Rawhide sounding, and I searched for a cocktail that would go with this. All I could find was the Moscow Mule which is ginger beer or ginger ale, lime, and vodka. Well l'm a gingeer beer fanatic so this sounded great to me, but I not a big fan of vodka, due to its complicity in the death of the cocktail tk, so I switched it up for my favorite liquor, gin, instead. This turned out to be a great, refreshing drink, and became an instant hit with all my friends. The only problem is it's very hard to order this drink in any bar as very few stock ginger beer and it's just not the same with ginger ale. So imagine my excitement when after cooking Khao soi for my friend Ben and his wife (see? it all comes full circle eventually, despite the long digressions), Ben took me to the Lower East Side Australian bar Barramundi where my friend Z is working. Now I'd heard from another recently returned Aussie friend that a rum-based version of the Moscow Mule/Siberian Sidekick, the Dark and Stormy, was the national drink of Australia or at least Queensland territory because of the ginger-beer maker Bunderberg there. So I asked Z if he had ginger beer for making Dark and Stormies, which he in fact did. So I asked him to try whipping up a Siberian Sidekick with it, which he did and he loved it and said immediately that he'd add it to their already eclectic and lengthy cocktail menu. I'd love for them to be randomly inundated by orders for the Siberian Sidekick, so everyone go there and order one, especially on Monday, Friday, and Saturday when Z works there!

After that little ethnobotanical/cocktail (ethnomixological?) interlude, back to the food. I didn't try Sienna's green curry chicken though she seemed pretty happy with it, so I'll move right on to the main event. The Khao Soi arrived in an appropriately deep bowl to hold plenty of tasty curry and stacked with a good bunch of fried noodles so these were both promising signs. Breaking through the mound of fried noodles revealed some nice chunks of mock vegetarian duck, sprouts, and noodles, but not much else in terms of veggies, especially the the oh-so-good pickled mustard greens which give such a nice zing to the curry. The lack of this and other toppings on the side to add like the lime was made up for however by the depth of the curry broth, tending a little bit more towards the star-anise, musky side of things. It was hard to resist slurping down all the broth even though I was getting full from all the noodles.

This was definitely the most authentic Khao Soi I've found in the East Village, garnering it 4 stars. Even without knowing much about the other food, with the excellent Khao Soi and refreshing cheap drinks, Klong is definitely worth a visit. Perhaps ducking into the restaurant off of busy St. Marks makes it feel all the more like visiting some trendy noodle shop off a crowded Bangkok street. Setting is everything, right?


We bumped into your blog and we really liked it - great recipes YUM YUM.
We would like to add it to the Petitchef.com.

We would be delighted if you could add your blog to Petitchef so that our users can, as us,
enjoy your recipes.

Petitchef is a french based Cooking recipes Portal. Several hundred Blogs are already members
and benefit from their exposure on Petitchef.com.

To add your site to the Petitchef family you can use http://en.petitchef.com/?obj=front&action=site_ajout_form or just go to Petitchef.com and click on "Add your site"

I'm really happy to see that you're updating the blog again! I am also a Khao Soi fanatic and have tried many of the places you've recommended. I am jealous that you just returned from Chiang Mai, I lived there for a year and wish I'd gotten to try all of those places.

I wanted to let you know about two new places with Khao Soi in NYC. One is a new restaurant in the west village called Tue Thai http://www.yelp.com/biz/tue-thai-food-new-york I really like their Khao Soi, it's made with a yellow curry base and I like their thin noodles.

Today on Thrillist a new restaurant was listed Obao http://www.thrillist.com/popup/90240/90247popup_1.jpg which has "Chiang Mai Curry Noodles" - It's not clear if there's a vegetarian version.

Anyway, can't wait to see what new places you find as well. Welcome back!

Deirdre, Glad you enjoy the blog! I've neglected to mention this on the blog so far, but I've moved to Hawaii 9 months ago, so I won't really be able to update with new places in New York unless I can fit them in when I return about once a year. I may have to have you do a guess post for these places you found! Contact me at nbletter followed by yahoo dot com if you're interested.

I still have a few more in NYC that I visited before I left and in my last trip there that I have to post the reviews of slowly.

Did you say that the Khao saoi you had at Klong was made of rice noodles? Was it really good? Just wondering, because Khao Soi is made with fresh yellow egg noodles. Rice noodles would give it a completely different taste. I did search on Yelp for Khao Soi and read some reviews across some Thai restaurants in NYC for Khao Soi and there is a restaurant called Talent Thai (?) that serves Khao Soi and the reviewer said it was pretty good and the best they have had in NYC yet. I'm going to have to give Talent Thai a try (even though the restaurant itself didn't get stellar reviews).

Hi Nat, found your blog after a search for 'khao soi new york.' Just read your comment and I see that you've moved to Hawai'i! I actually just moved from Hawai'i to New York about a month ago. You might've already tried it, but the khao soi at Spices in Moili'ili is amazing! I'm craving it right now, so that's what got me on the hunt for a great bowl of it here. What is your best recommendation?

yes, Spices is actually my favorite restaurant in Honolulu and has tasty Khao soi along with many other dishes! It is only one of two places where I've found it here and I plan to do a post on it soon. The other one isn't even really worth mentioning.

In NYC definitely try Rhong Tiam, Sripraphai, Pam Real, and Chili Thai, all of whom have good versions of Khao soi and lots of other tasty dishes. Have fun!

The Kao Shoi at Talent Thai is quite good--heavy on the sour and red onion.

BTW, a Moscow Mule with gin instead of vodka is an old timey drink called the Gin Buck or London Buck.

Thanks for the review of Talent. I still haven't been there, but went to Sala Thai recently on the UES which I'll write up soon. Interesting but not great.